The Creation of This Planet Earth

The two beginning chapters of the Biblical Book of Genesis provide a lot of information concerning “in the beginning” of this planet’s existence. Chapter one relates how its creation was planned, step by step. Chapter two tells how those steps were applied as the earth was transformed into a physical reality. The accounts tell how Adam was first created, then Eve was created and they were transferred into living human beings.

But much more of the creation accounts is added in the Pearl of Great Price Books of Moses and Abraham. They make it clear that this earth is only one of untold thousands of earths the God the Father and His Son Jesus have created. And each new earth has it’s own “Adam.” As is shown in this “Helpful Handout,” other scriptural sources add a host of new understandings to how this earth came into existence, how mankind came into existence here, and what are God’s purposes as He brings new planets, with their own unique populations, into reality. 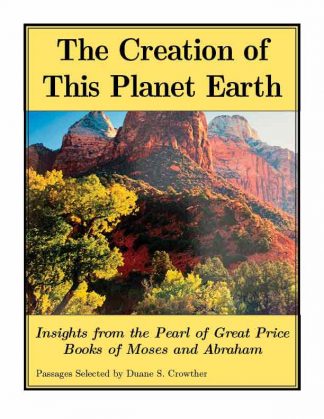 You're viewing: The Creation of This Planet Earth $1.99
Add to cart