Prophecy Key to the Future

Thoroughly based on the Bible and latter-day scriptures, and on prophecies made by Latter-day Saint General Authorities, Prophecy–Key to the Future presents extensive prophetic descriptions of numerous future events with care, documenting them fully and precisely in a scholarly fashion.

The book cites warnings of a 3rd world war, and later a 4th world war, with a terrible period of worldwide anarchy between them. It documents prophecies of present and future events such as the worldwide growth of The Church of Jesus Christ of Latter-day Saints; the worldwide preaching of the gospel; the gathering of Israel; the conversion of many of the Lamanites. It also clearly warns of future great judgments by famine, sword, and pestilence.

It focuses on the returning  of some of the lost 10 tribes; the building of the New Jerusalem; the Battle of Armageddon; and other events preparing for the Lord’s coming in glory.

If you want to recognize and understand the present and other near-future events, Prophecy – Key to the Future definitely is a must-read book for you! 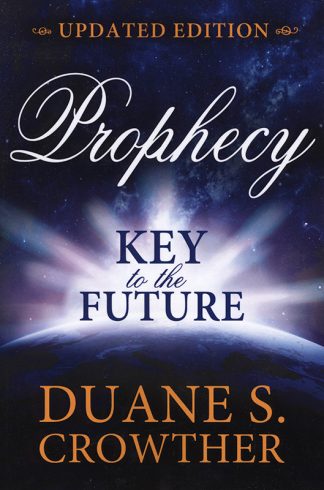 You're viewing: Prophecy Key to the Future $24.99
Add to cart