The Prophecies of Joseph Smith is a well-written biography which documents the major events in Joseph’s life, depicting them in the text but also showing them in a very useful set of maps which list and show his significant travels. A major objective of the book is to report the prophecies made by Joseph and then to show exactly how those prophecies were literally fulfilled. The book itself moves through the Palmyra, Restoration, Kirtland, Missouri and Nauvoo periods with careful attention to the major events in the Church which affected Joseph’s life and destiny. A useful summary of the messages of the book is listed in the four appendices which list 184 scriptural prophecies about Joseph Smith and the restoration, 141 prophecies made by Joseph Smith, 40 prophecies about him made by other people, and 52 other supernatural experiences. All of these combine to bear witness that Joseph Smith truly was and is a prophet called and authorized by God. Rich with history, this readable and inviting book will hold the interest and strengthen the testimonies of both young and old. 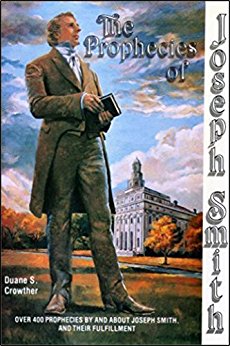 You're viewing: The Prophecies of Joseph Smith {Downloadable PDF eBook} $8.99
Add to cart