One Lord, One Faith: Writings of the Early Christian Fathers as Evidences of the Restoration

One Lord, One Faith presents writings of the Early Christian Fathers as evidences of the restoration of the LDS Church in these last days. The “early church fathers” is a term used in reference to the outstanding bishops, elders and apologists who wrote in defense of the Christian faith during the first three centuries after Christ. The writings of Ignatius, Clement of Rome, Polycarp, Justin Martyr, Methetes, Lactantius, Origen, Eusebius, Tertullian, Hippolytus, Didymus, Methodius, Clement of Alexandria, Cyprian, Irenaeus, Chrysostom and many other early Christian apologists are cited in One Lord, One Faith. Forty-three doctrinal areas are examined, including intriguing topics such as the Father, son and Holy Ghost as three separate deities; the Son’s subordination to the Father; the identity of Jehovah; Jesus as the Firstborn; pre-mortal existence; godhood as man’s divine potential; the apostasy and restoration; the need for continuous revelation; good works being essential for salvation; the necessity of baptism; and higher teachings and ordinances in ancient Christianity. 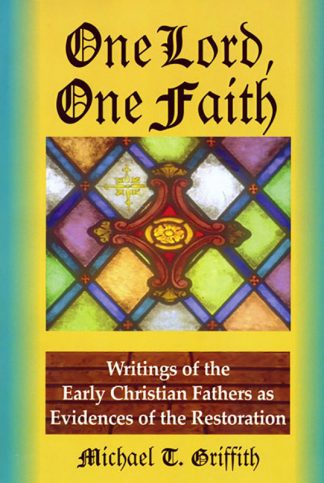 You're viewing: One Lord, One Faith: Writings of the Early Christian Fathers as Evidences of the Restoration $17.98
Add to cart