Missionary and Temple Work for the Dead [2 CDs]

Missionary and Temple Work for the Dead is a powerful witness of the need for missionary work and temple ordinances for the dead, citing in-depth evidence from the scriptures and from personal testimonies. The discussion shows that every person must have the opportunity to hear the gospel plan, explaining that the dead who hear the gospel preached have their agency to either accept or reject the saving ordinances done for them vicariously. Clear distinctions are drawn between the Spirit Prison, Paradise, and Hell, showing that they are three separate locations inhabited by different levels of spirit beings. Many people have been shown the great work being performed beyond the veil. Missionary and Temple Work for the Dead quotes such experiences, citing visions of beautiful cities in which the dead are being instructed, large meeting rooms, and groups of thousands studying and listening to the gospel. Other accounts tell of visitors from beyond the veil appearing to mortals to seek the completion of their genealogy and temple work. This is a highly informative and comforting presentation! 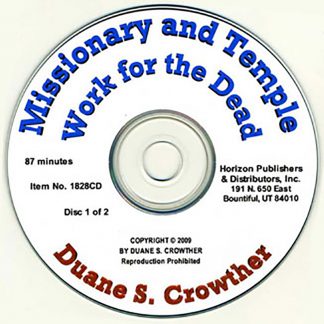