Interpreting the Book of Revelation

Interpreting the Book of Revelation is a detailed and documented analysis of the most challenging book of the Bible. John’s Revelation extends from before the creation to the end of this earth’s temporal existence. This CD discussion covers the pre-mortal war in heaven, John’s messages to the Churches in his day, explanations of the angelic trumps, and the opening of the seven seals. Drawing numerous interpretive insights from other LDS scriptures, it deals with the terrible plagues of the last days, the “beast” who will oppose the Lord’s work, and implications of the prophetic number 666. It also describes the temple to be built in Jerusalem, the Battle of Armageddon, the fate of the great and abominable church,  the second coming of Christ, the first and second resurrections, the millennium, the Battle of Gog and Magog, the great “White Throne” judgement, the eventual dissolution of the temporal earth, the descent of the Old and New Jerusalems, and eternal life in the “new heaven and the new earth.” (1 CD, 76 minutes) 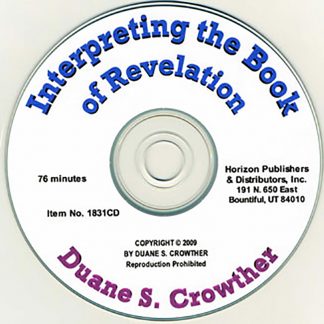 You're viewing: Interpreting the Book of Revelation $15.98
Add to cart