The battle of Armageddon is the most prophesied event in all scripture. Named for Mount Megiddo in Israel’s fertile Plain of Esdraelon, the 3 1/2 -year war is to take place shortly before the final coming in glory of the Lord Jesus Christ. Prepared by a scholar who has specialized in the study of prophecy and last-days events, this CD provides a detailed explanation of this future cataclysmic event. There will come a time when many nations will rise against Israel. A great general, Gog, will lead his army, Magog, to battle against the Israelite forces. The two armies will engage in fierce combat on the mountains of Israel, and the conflict will extend into Jerusalem, which will be overrun by the enemy. God will then move in to save his chosen people with an earthquake. The aftermath of the great battle is told—the great losses which will occur in both armies, the years of cleanup and recuperation, and the period of renewed missionary work. Glory and blessings will rest upon Israel in the generation after the Battle of Armageddon, but still prior to the Lord’s final coming in glory. (1 CD, 66 minutes) 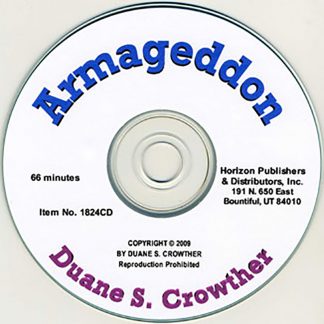