Ancient Writing on Metal Plates is the culmination of years of research and travel to actual sites, thousands of photographs, and hundreds of books studied. Until recently, most scholars believed that the ancient American Indians did not have a written language. When Joseph Smith translated the Book of Mormon in 1830, he stood alone in his claims that some ancient Americans not only knew how to write, but even engraved their histories on metal plates and buried these records in stone boxes. Dr. Cheesman explores the many similarities in Old and New World writings, traces the roots of languages spoken by Pre-Columbian Indians, and announces documented discoveries of engravings and other writings found in the Americas. He compiles extensive evidence from modern research which demonstrates that ancient cultures throughout the world commonly wrote and protected records in the same manner. Scholars of our time have discovered metal plates that were used by the Greeks as far back as 500 B.C. Museums in Korea, Iran, Israel, Jordan, Greece, Italy, Spain, France and England display artifacts containing ancient writing, from which the author has compiled his exhaustive collection of photographs for the book. Ancient Writing on Metal Plates compiles strong evidence in support of the “metal plates,” “stone box,” and “Indian writing” claims made by Joseph Smith and the Mormons over 200 years ago, with photographs of many of the major archaeological findings. This is a significant book, not only for Latter-day Saints, but also for students of history and archaeology worldwide. 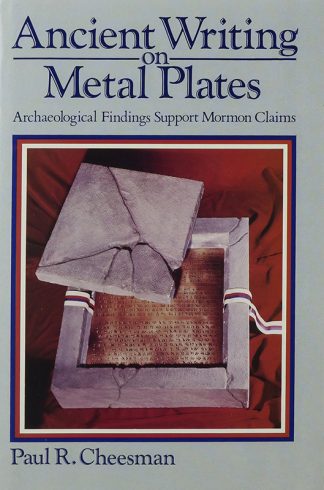