A Challenge to the Critics: Scholarly Evidences of the Book of Mormon

A Challenge to the Critics refutes falsehoods about the Book of Mormon. in an orderly and scholarly manner. It systematically exposes fraudulent assertions by presenting irrefutable evidences drawn from the findings of historians, anthropologists and archaeologists. Intriguing topics such as the Smithsonian statement, metal plates, stone boxes, word-prints, chiasmus, and Hebraisms are discussed, as well as early codices, ancient American scripts, and reformed Egyptian. Other important themes include the Nephite monetary system, the wheel, and the existence of elephants, horses and bees in ancient America. The author also provides evidence and new insights concerning the Jaredite, Mulekite and Israelite origins. The Lehi Tree of Life Stone figures prominently in this discussion, and most significant is the evidence given concerning the coming of Christ to the Americas. In a decisive and straightforward style, this carefully researched book establishes a major challenge to anti-Mormon critics, carefully exposing many of the misrepresentations, false assertions and unsubstantiated claims of those who have attacked the veracity of the Book of Mormon as scripture revealed by God. 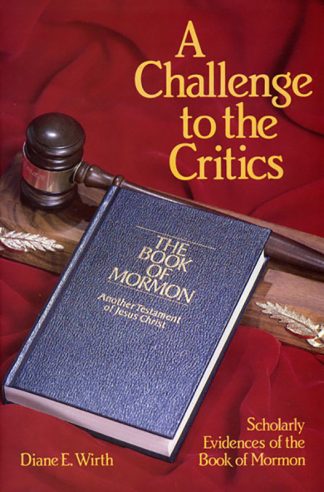 You're viewing: A Challenge to the Critics: Scholarly Evidences of the Book of Mormon $12.98
Add to cart